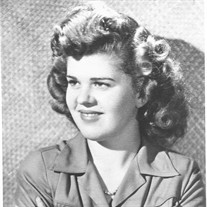 > Anna Louise Love, 89 of Mansfield, passed away at the Harmony House Health Care Center in Brewster, WA on December 5, 2014 after a long period of poor health. > > Louise was born on June 12, 1925, to her parents Carl and Feirda Dietrich. She grew up on her father's apple orchard just west of Chelan, WA. Her parents had five children; Winnie, Louise, Rita, Karl Jr. and Donna. Their family home and orchard on Dietrich road was next to Lake Chelan and included a dock for boating and watching the Fourth of July fireworks, which were fired from a barge in the middle of the lake. Many fond memories she had of swimming and cider pressing parties, with family and friends at her beloved Lake Chelan. > > Upon graduation from high school, Louise went on to attend college at Eastern Washington College, (now known as a University), in hopes of becoming a teacher. While living in eastern Washington she also worked at a local candy business "Loose Wiles Biscuit Company". Her education was interrupted when she met Donald James Love at the Pavilion in Chelan during a social dance event. He apparently swept her off her feet, because shortly after, they were married. She moved to Mansfield to begin their new life together on the Love family ranch west of Mansfield. Don was the "Love Of Her Life" whom she called her "DJ", and he referred to her as his "BlueEyes". > Don and his brother Joe had began building up the family wheat and cattle farm as the troops were coming home from World War II. Louise found herself very busy as a homemaker while Don and his brother farmed. Her children still remember her as a very loving mother and a great cook. Though difficult at times their joint efforts created a prosperous farm operation. > > They raised four children, Bob, Connie, Stephen and Donita. Louise and her husband were active in the Mansfield Grange, Garden Club and the Wheat & Cattle Associations. They were also active members of the Community Of Christ Church in Bridgeport and Wenatchee. Her family remembers her often saying how grateful she was for her life, and the family she loved so much. Louise touched everyone she met with her beautiful smile, and gentle and loving spirit. She was a happy lady, who had an incredible sense of humor! As Louise’s health began to fail later in her life, she eventually resided at Harmony House in Brewster, WA, where she was loved dearly by both staff and fellow residents in the last ten years of her life. Her beloved husband passed away at Harmony House in July of 2011. > > Louise is survived by her son, Bob (Brenda) Love of San Jose, CA, Connie (Donald) Whitman of Wenatchee, Stephen Love of Mansfield and Donita (David) Bernstein of Wenatchee and six grandchildren. > > A celebration of her life will held 11 a.m. Monday, January 5, 2015 at the Precht Rose Chapel, located on 332 Woodin Ave. in Chelan. An Internment will follow at the Mansfield Cemetery. Friends are welcome to join the family at the reception dinner, which will be held at The Mansfield United Protestant Church. Memorial contributions may be made to the Mansfield Ambulance Association. Arrangements will be made by Precht Rose Chapel, Jones & Jones-Betts funeral homes of Chelan and Wenatchee. The family would like to acknowledge with love and gratitude to Harmony House Care Center in Brewster, for the amazing care of both of their parents. >

> Anna Louise Love, 89 of Mansfield, passed away at the Harmony House Health Care Center in Brewster, WA on December 5, 2014 after a long period of poor health. > > Louise was born on June 12, 1925, to her parents Carl and Feirda Dietrich.... View Obituary & Service Information

The family of Anna Louise Love created this Life Tributes page to make it easy to share your memories.

&gt; Anna Louise Love, 89 of Mansfield, passed away at the Harmony...