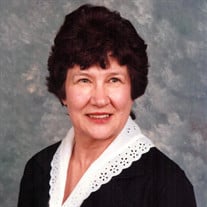 Alvera Faye Moss went to be with the Lord on Thursday, November 17, 2016. Alvera was born at home to parents, Albert and Hazel Shockley on July 28, 1925 on a small farm in Wimbledon, North Dakota. During her youth, she loved riding her pony, singing, tap dancing, and playing the clarinet. Upon graduating from high school at the age of 16, she moved to Hollywood, CA to live with her grandmother. There, she attended the American Institute of Banking, and worked as a bank teller. She later returned to North Dakota and married Douglas Oglesby. Together they raised five children. Alvera loved spending time at the Spiritwood Lake cabin with her children and later with her grandchildren, sharing many Bible stories and teaching them about Jesus. She also led and attended many Bible studies over the years. Her number one priority throughout her life was her personal relationship with the Lord. She also enjoyed entertaining family with tap dancing and playing the Thomas organ. Her love for music and her gift for singing gospel music continued throughout her life. She often sang for weddings, funerals, cantatas, and special events. Career opportunities during her early life included being a night-shift caregiver and being a teacher in a one-room country school where she taught grades one through eight, with only a coal stove for heat. In 1975, she came to Leavenworth, WA to be closer to family and worked a season in the apple industry. Alvera, at the age of 50, returned to college and received her associate degree at Wenatchee Valley College, pursuing Journalism. During this time, she worked as a receptionist at the Elks Club and also pursued her love for writing poetry. She became an accomplished writer and received an award in Washington, DC for her poetry. Upon college graduation, she was hired as a proofreader for the Wenatchee World and retired in 1995 to Manson, WA, where she worked as a librarian. It was there that she met and married Orville Moss. They shared 6 happy years together before his death. Alvera spent her last 6 years as a resident at Blossom Valley Assisted Living. The family wishes to thank the staff and residents for the love, friendship, and compassionate care given to their mother. Alvera is survived by her children, Melodye (Lyle) Thompson of Seattle, WA, LeeAnn Matson of Wenatchee, WA, Doug (Sandy) Oglesby of El Dorado Hills, CA, George (Peggy) Oglesby of Vergas, MN, and Nate Oglesby (Carl Smith) of Leavenworth, WA, and 3 grandchildren, 4 great grandchildren and 8 great-great grandchildren. A celebration of her life will be Wednesday, November 30, 2016 at 11:00 AM at Precht Rose Chapel in Chelan.

Alvera Faye Moss went to be with the Lord on Thursday, November 17, 2016. Alvera was born at home to parents, Albert and Hazel Shockley on July 28, 1925 on a small farm in Wimbledon, North Dakota. During her youth, she loved riding her pony,... View Obituary & Service Information

The family of Alvera Faye Oglesby Moss created this Life Tributes page to make it easy to share your memories.

Alvera Faye Moss went to be with the Lord on Thursday, November...