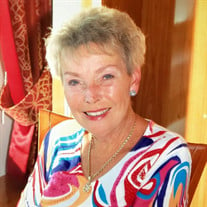 Alice Lorene Smith (Egbert) Soma (Allie to her closest friends), aged 75, passed into the loving arms of her Lord on Friday, April 10, 2020. She passed after a battle with cancer. She was a resident of El Mirage, AZ for the past 7 months and previously resided in Chelan, WA for 20 years, where she retired in 1999 with her husband, Lyle. She formerly lived in Mukilteo, Lynnwood, and Mountlake Terrace. Alice was born in Billings, MT on October 10, 1944. Her parents were Ruby Burns Smith and Charles Madison Smith. After early years in Montana and Oregon, she and her mother moved to Yakima, WA, where Alice attended school, graduating from Davis High School in 1962. She was active in high school as a song leader, band member, honor society member, and in debate and drama. She also was an active member of Englewood Christian Church, Youth for Christ, and a state officer of her church’s youth organization. Alice won a scholarship to Seattle Pacific University where she earned her bachelor’s degree in education. She was active at SPU as a Falconette, in music and drama, and other service organizations. She was head proctor of her dorm for two years. She completed her Master of Education at the University of Washington, specializing in vocational special needs. She taught for thirty years in the Edmonds School District, first teaching English, French, debate, history and reading, and then moving on to coordinate the national award-winning vocational evaluation center for 24 years. She had a gift for bringing out the best of special needs students. She found the positive in all her students as well as those she worked with. Alice was also active in the Washington Association of Vocational Special Needs Personnel, being an officer and conference chair. Alice married Larry John Egbert of Kiona, WA in 1965, having her first-born, Janet Renee. Larry passed away soon after Janet’s birth. Lyle Soma entered her life and they were married in 1972. Alice always jokingly said that Lyle “wouldn’t go home” so she had to marry him and he adopted Janet. They welcomed Julie Leann into the world and shared in the raising of his children, Pamela Kay and Chadwick Lyle. Lyle and Alice spent 46 years happily married and they always owned an RV and spent their vacations traveling or camping, later enjoying many sunny winters in Arizona. Some of her happiest days were spent at Happy Trails in Surprise, AZ. Alice did not consider herself artistic, but she was usually found with a crochet or knitting project in process. She enjoyed her handiwork, donating afghans and hats to Guild B and Manger Mall. She also kept busy working in her yard, arranging flowers, and keeping a ‘sort of’ clean house. She was also a reader, active on her computer, always doing something with pictures. She learned to play Mah Jong. Alice was a good cook, doing lots of canning, freezing and baking. She learned to play golf after moving to Chelan where she participated in the ladies’ group since 2002. She referred to herself as a “hacker and whacker”. Alice joined the Lake Chelan Hospital Guild B in 2004 and served as president, secretary, and hostess chair. She enjoyed her years in the guild. She was a member of Lake Chelan Lutheran Church, serving on the alter guild for years. She also enjoyed writing the “Tee Time” for the ladies’ golf. Alice is also survived by four grandchildren: Coby Joseph and Jonah Carlton Weston in NC, Kaley Christina Soma in OR and Blake Robert Barnard in AZ. In lieu of flowers, memorial donations may be given to Guild B Lights of Love, P.O. Box 2177, Chelan, WA 98816 or Manger Mall, P.O. Box 477, Chelan, WA 98816. Alice’s memorial service will be scheduled in Chelan, WA later this year, date/time TBD.

Alice Lorene Smith (Egbert) Soma (Allie to her closest friends), aged 75, passed into the loving arms of her Lord on Friday, April 10, 2020. She passed after a battle with cancer. She was a resident of El Mirage, AZ for the past 7 months... View Obituary & Service Information

The family of Alice Soma created this Life Tributes page to make it easy to share your memories.