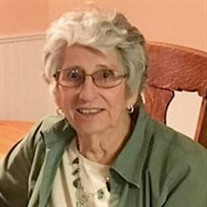 Adored resident of Chelan, WA, Alice June (Griffith) Hanson passed away peacefully on August 31st, 2020. She was born June 3rd, 1939, the youngest of Walt and Dorthy Griffith. She grew up on Griffith Hill in Manson, playing alongside her siblings and many cousins. She graduated from Manson High School, and then she attended Kinman Business College. Alice met the love of her life, Elton and they would marry on December 26th, 1957, and celebrate many joyful years together. During these joyful years, they would welcome two baby boys to make their loving family four. Alice was privileged to have the opportunity to raise her children at home while Elton taught at Lacrosse and Federal Way. In 1969, Elton, Alice, and their two boys moved back to Chelan and began their new adventure of starting Hanson Electric. When the boys graduated high school, Alice started working at Shirt Shop Plus. She would dedicate 30 years to the community of Chelan behind the counter, greeting her regular customers and the many tourists that stopped by for a piece of Chelan memorabilia. When Alice was not creating magic at Shirt Shop Plus, she enjoyed countless hours playing on the lake with Elton and family, growing a garden large enough to feed the valley, and playing bridge with the ladies. After Elton had passed, Alice moved to the house on Lake Street, where she was surrounded by love from her welcoming neighbors. These neighbors continued to be a support system. Her survivors include children Rick and Robin Hanson of Chelan, WA, and Renn and Angela Hanson of Edmonds, WA; her grandchildren: Erika, Breanne, and Bobby; her cat, CeCe and her fur-grandchild Callie; her sisters Helen Cool of Chelan, WA, Milly Southwick, Chelan, WA, Luella Rushing, Republic, WA; her sister-in-law Shirley Smith Benton City, WA; and many nieces and nephews. Alice is proceeded in death by her parents, Walt and Dorthy Griffith, and her husband, Elton Hanson. Those who wish may make memorial donations in Alice’s name to Chelan Senior Center, 534 E Trow, Chelan, WA 98816, or the FFA Alumni, PO BOX 1530, Chelan, WA 98816. Please feel free to leave any thoughts and memories for the family at www.prechtrose.com. Services are entrusted to Precht Rose Chapel of Chelan, WA. Due to the uncertainty of COVID-19, Alice’s Celebration of Life with be held at a later date.

Adored resident of Chelan, WA, Alice June (Griffith) Hanson passed away peacefully on August 31st, 2020. She was born June 3rd, 1939, the youngest of Walt and Dorthy Griffith. She grew up on Griffith Hill in Manson, playing alongside her siblings... View Obituary & Service Information

The family of Alice June Hanson created this Life Tributes page to make it easy to share your memories.