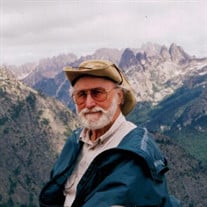 On Jan 20, 2018, Albert "Bruno" Moser, age 91, died at home and entered the Kingdom of Heaven on the wings of angels. His family encircled him as his soul departed. One of nine children, Pop's was born "a wandering star" on May 30, 1927, at the family homestead near Medina, N. Dakota, to Charles P. and Lydia Hoffmann Moser. Bruno left school after the 8th grade to work on the farm. In 1945, he joined the Army and served as an M.P. during WWII, then after being honorably discharged, he used the GI bill to attend barber school in Jamestown, N.D. He moved in Bismarck, ND where he met his 1st wife, Elsie Helen Walker. Pop's left barbering to work varies other jobs including dressing mannequins and working in the oil fields until he was hired by the Bureau of Reclamation. Our family moved frequently, living in many States until 1967, when Pop's was hired by Bonneville Power which brought us to Wenatchee, Washington. He obtained his GED from Wenatchee Valley College. In 1976 he and his 1st wife divorced and in 1978, Pop's married Myrna (Law) Walker. As an inspector on transmission power line towers, they moved throughout the Pacific Northwest until Pop's retired in 1983, at which time, he and Myrna built a log home on the Bridgeport/Brewster Bar. Bruno had a passion for woodworking and he donated countless hours doing building repair and maintenance on the Community Log Church in Brewster and the Pateros Community Church. Pop's liked everyone he met and selflessly assist anyone who needed someone handy with a hammer and saw. He enjoyed gardening, volunteering at Harmony House where he served coffee, performing as a clown in town parades, and he was well known for his heartfelt hugs. In celebration of his birthday, Bruno initiated Moser's May Madness, which he hosted for many years. Good laughs and abundant memories were enjoyed with his kids and grandkids while fishing, hunting and hiking. In his later years he enjoyed watching westerns and pro football. Pop was preceded in death by his parents, four brothers: Ted, Edwin, Ernest, Ray and one sister, Alvina Munkers. He is survived by brothers Oscar and Leon, and sister Leah Grentz. Bruno leaves behind his devoted and loving wife, Myrna, and their children: Joel (Tere) Moser in Saugus, CA, Karen (Ken) Bailey, Mona (Ernie) Vipond, Cheryl (Edward) Faust, all in E.Wenatchee, Kolo (Stacy) Moser in Oroville, Russ (Becky) Walker in Shelton, Keith (Elise) Walker in Okanogan, and Pastor Steve (Shari) Walker in Trappe, PA. They have 20 grandchildren and 18 great-grand children. A memorial service will be held at Barnes Chapel in Brewster, WA on Feb 10 at 11 a.m. In lieu of flowers, charitable gifts may be given to The Gideon's or The Salvation Army. To our beloved Husband & Dad: go rest high on that mountain, for your work on earth is done, go to Heaven adancing, greet the Father and the Son.

On Jan 20, 2018, Albert "Bruno" Moser, age 91, died at home and entered the Kingdom of Heaven on the wings of angels. His family encircled him as his soul departed. One of nine children, Pop's was born "a wandering star" on May 30, 1927, at... View Obituary & Service Information

The family of Albert "Bruno" Moser created this Life Tributes page to make it easy to share your memories.