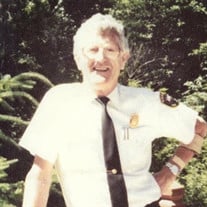 Al passed on to Heaven on December 27, 2014 surrounded by his wife and family. He was born in Walla Walla, WA, the sixth of seven children to Morris & Margery Langton on June 4, 1934. Al is survived by his beloved wife Bernie; Children - Dave & Diana Langton of Spokane, Cheryl & Don Hare, of La Mirada, CA, and Lyn & Dave Storm of Arlington, WA. Six grandchildren - Jared & Cassie Langton of Tumwater, Jaime Langton of Portland, OR, Carrie & Grant Reed of Corona, CA, Crystal & Ryan Sampogna of Temecula, CA, Jed Golder of Marysville, and Katie Golder of Marysville, as well as seven great grandchildren who called him "Big Papa" and his sister Gertie of Shoreline, brother & sister in law Floyd & Betty Langton, of Bremerton, brother and sister in law, Stan & Jeannette Langton of Spokane, and Sister in law & brother in law Pat & Gerry Wilder of Everett. As a young boy he started working in the strawberry fields for the "Klicker Ranch" He had many good memories & stories to tell. He graduated from "Wa-Hi" in 1952. He loved the "Blue Devils". In August of 1952 much to his Father's delight, Al joined the US Navy. He spent four years in the Navy, most of the time at sea aboard the USS Hornet, on the flight deck. He made the trip around the World on the Hornet. His good friend, Jerry Johnson introduced Al, while on Boot Leave to his future wife Bernie Weeks, in November, 1952. They sent letters every day & were married while Al was on leave on December 22, 1954. They spent time in San Diego before the Hornet left again for a seven month journey in May of 1955. When the Ship returned to San Diego, Bernie met Al in Coronado with their two month old son Dave. In 1957, their first daughter, Cheri was born. In 1962, they welcomed their second daughter, Lyn. Al was a hard worker, after his honorable discharge in 1956, they moved to Everett, WA. While Al was working as an upholsterer & at Weyerhaeuser, a friend asked if he was interested in being a Firefighter. Excited about it, Al passed the exams and waited for an opening. He spent thirty-one years as an Everett Firefighter and always went to work with a smile on his face. He retired as a Battalion Chief, in February 1992. Al was active in the Boy Scouts, helping his son, Dave to become an Eagle Scout and was active with his daughter's with their many activities. He was a member of the Everett Evergreen Kiwanis and taught CPR through the Fire Department to middle school kids in Everett. Al & Bernie & children were members of the First Baptist Church in Everett. Al was an exceptional husband, father, Grandpa & "big" Papa and raised their family in Everett. In 1995, Al & Bernie followed their retirement dream & moved to Lake Chelan, leaving many friends & family. Al & Bernie joined the Lake Chelan Newcomer's & met many lifelong friends & new activities. Al & Bernie loved golf and having the grandkids visit Chelan to enjoy swimming in the lake with their Grandpa. Al & Bernie were inseparable. Their 60 years of marriage will be celebrated on December 22, 2014. Al was the epitome of a true Christian Man. He loved people and was always busy with friends, golf and yard work. Some in Chelan will remember him as the "tall guy" that worked part time at Kelly's Hardware. He is an irreplaceable man who loved in Wife, Children, Grand Children, Great Grand Children, & was a friend to all with love & understanding. Al was preceded in death by his parents; two brothers, one sister and a special great granddaughter, Hailey Lynn Langton. A private family burial will be in Chelan at the Fraternal Cemetery. A public memorial service will be held for Al on April 18, 2015 from North Shore Bible Church in Manson, WA. In lieu of flowers please consider donating to the Alzheimer's Assoc. (www.alz.org) or to the Lights of Love - in care of Guild B Box 2177, Chelan, WA. 98816. Thank you so much to Dr. Wazkiwitz, Stephanie Johnson, & a special thanks to all the care givers at Regency Manor Nursing Home. They treated him with love & respect. Al will truly be missed.

Al passed on to Heaven on December 27, 2014 surrounded by his wife and family. He was born in Walla Walla, WA, the sixth of seven children to Morris & Margery Langton on June 4, 1934. Al is survived by his beloved wife Bernie; Children -... View Obituary & Service Information

The family of Albert Louis Langton created this Life Tributes page to make it easy to share your memories.